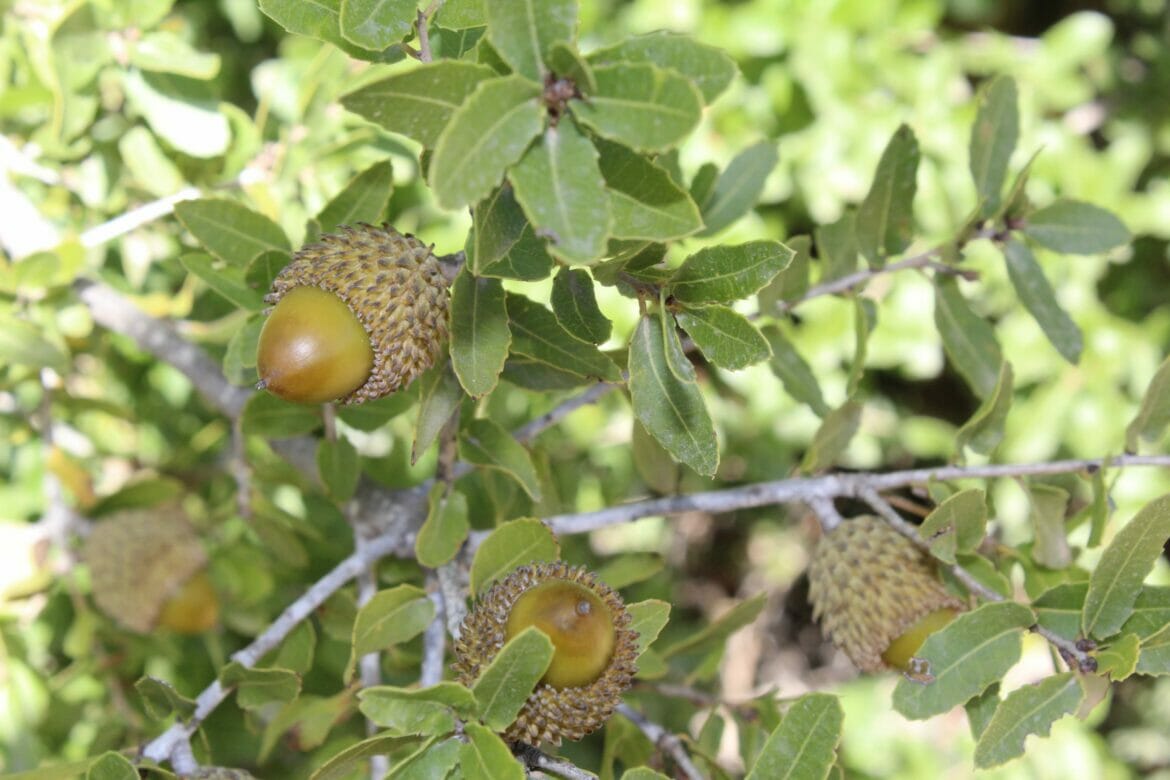 by Elly Waller, a guide at the Neot Kedumim Biblical Landscape Reserve.

Profound messages from our prophets, kings and rabbis were drawn from references to nature. We can only fully understand their meaning if we learn about the trees, flowers and plants they mention. I will focus on tall trees.

Alon and Ela: Oak and Terebinth

Tall, stately trees have been revered as gods since the beginning of recorded history. The word for a god in Hebrew is  el אל. Two kinds of impressive trees in Israel have the word el אל embedded in their names. Alon אלון is the oak and Ela אלה is the terebinth.

When Abraham had a revelation that there was only one almighty God, he campaigned to promote this radical new idea. Tradition has it that he smashed his father’s idols which may have been fashioned from oak and terebinth wood. While the people were chastised for worshipping the oak and terebinth trees, our forefathers and mothers pledged allegiance to their one true God beneath these very trees, possibly in defiance of the popularly held belief that the trees had supernatural, providential powers.  Deborah, Rebecca’s nurse, was buried under an oak ( Genesis 35, 8) as it was a sign of respect to bury the dead under these tall trees.

Even though oak and terebinth have grown wild in Israel since ancient times and continue to figure prominently in woodland and scrub of the Mediterranean landscape, they are seldom given the respect they deserve. They are confused with other trees and with each other.

Oaks are solid, slow growing trees that can live for hundreds of years. The prophet Amos was aware of how tough oaks were when he used the term  חסון הוא כאלונים – as strong as an oak.

Quercus calliprinos אלון מצוי or Kermes Oak is the most common species of oak. It is evergreen, it flowers in the spring and produces acorns in the summer and fall.

Quercus ithaburensis אלון התבור or the Mt Tabor Oak is taller and deciduous – losing its spiky green leaves in the winter. It produces a fatter acorn with a spiky, shaggy cup.

Quercus boissieri  אלון התולע or Aleppo Oak is a taller species and grows in woodland above 800 metres. It is deciduous and its acorns are thinner and longer than other kinds of acorns.

The  name ‘tolea’ in Hebrew may refer to the name for the famous scarlet dye mentioned in the Bible תולעת שני ‘tola’at shani’ which was made from the oak coccoid. The insect attaches itself to the bark, sucks at the trunk and secretes a substance that forms a protective scaly gall nut. These were gathered, ground into flour, and cooked to produce the red dye. The galls were also used to make black ink used by Torah scribes.

Oaks of Moreh and Mamre

There is much confusion in the translations of “eilon” (and “eilonei”) in Genesis.  Were they oaks, were they terebinths or were they something else?

Genesis 12,6:  “Abram passed through the land as far as the site of Shechem,up to Eilon Moreh.”

Genesis 13,18:  “And Abram pitched his tent, and came and dwelt by  Eilonei Mamre, in Hebron…”

For the word eilon the 2nd century BCE Septuagint uses the Greek translation  drys meaning ‘great tree’ but it is not clear if this refers to oak or terebinth. The 1st century CE Targum Onkelos translated eilon into Aramaic as b’meishrei meaning neither oak nor terebinth but rather ‘plains’ or ‘the encampment’. The 1611 Kings James Bible translation also has ‘plains’ and in 1530 Tyndale’s translation used ‘oak grove’. In 1936 the Soncino Press translation used ‘terebinths’ as did the JPS and the New English Bible.

The most original interpretation of elonei moreh I found was in Rabinowitz in his book ‘Torah and Flora’,  where he shifted focus from the word eilon to the word moreh meaning ‘one who teaches’. In this interpretation eilon are the plains and the historically sacred tree is referred to as moreh – meaning an oracle giving instruction, used for divination and soothsaying.

There is a recorded history of a great tree near Hebron –  “Elonei Mamre in Hebron” that lived for  2000 years and it can be seen on the famous 6th century Madaba Map. It is still a puzzle as to what kind of great tree this was as a terebinth may have been there first and an oak planted later in its place.

In Isaiah 6, 13  we see the terebinth and oak are both mentioned as symbols of rejuvenation and survival. “As a terebinth and as an oak whose stump remains when they cast their leaves, so the holy seed is its immovable stump”

Today the humble oak acorns are making a comeback. Health conscious people are excited to rediscover a new gluten free superfood that has high nutritional value. Acorns can be used to make flour, stews, spreads and tasty snacks.

Acorns were always used for medicinal purposes. They are a good source of tannin so are helpful for preventing blood clotting. They are used to make remedies for burns and rashes, for infections and pain relief, for digestion and used to promote heart health and bone growth.

Stay tuned for Part Two…All about the Ela (terebinth)!

I’m Elly Waller. I’m originally from Melbourne, Australia and I live in Modi’in with my husband and 4 kids.

I’m a speech therapist and I run English language programs for children.

The only thing I like better than hiking, running and painting in nature is studying Tanach. At Neot Kedumim I’m encouraged to roam around with a Bible in hand, so it’s a dream job. I’d love to share more of what I’ve learned with you when you come visit!

1 thought on “Plants and Prophets: The Connection Between Nature and Tanach”