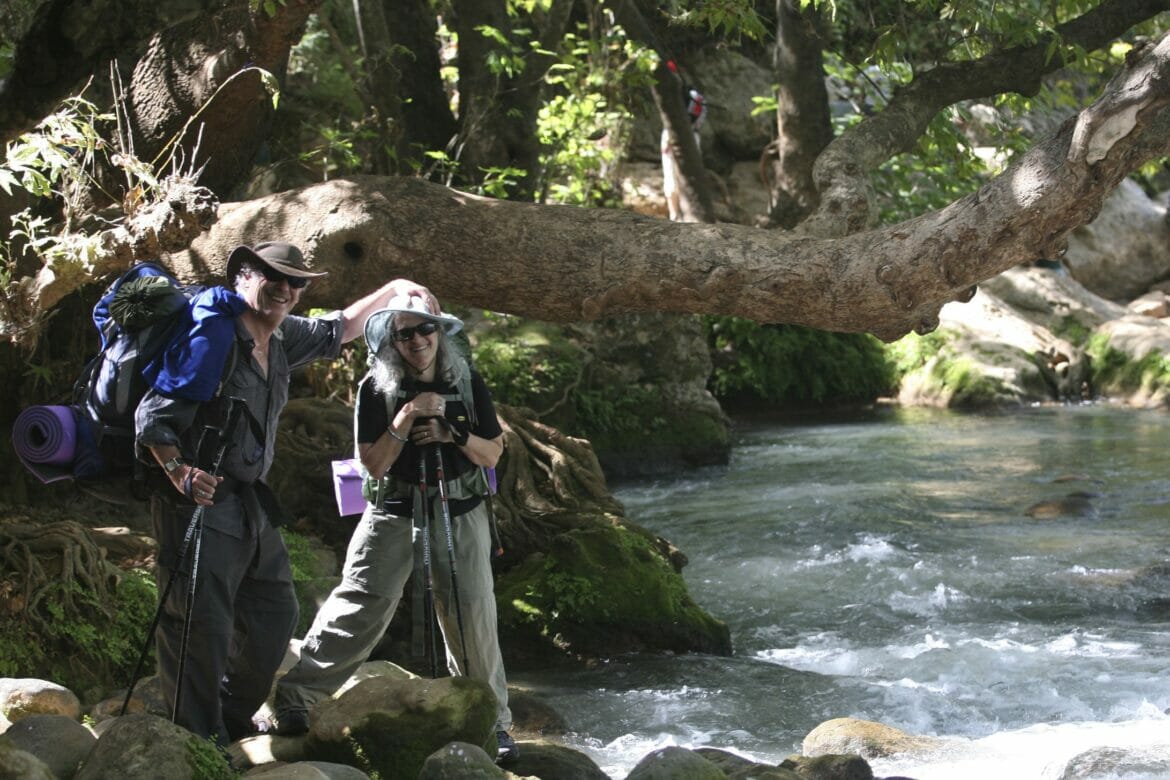 “A journey of a thousand miles must begin with a single step.” – Lao Tzu

My husband, a professional, active Israeli tour guide, a travel writer with three guidebooks under his belt, an avid hiker, and a lover of the Bible and Biblical history, often shares with me his ongoing amazement at the landscapes, contours and archaeological layers of Israel. In less than half a day, one can drive from the snows that linger until spring on Mt. Hermon, which exceeds 2800 meters in height, to the Dead Sea, the lowest place on earth at more than four hundred meters below sea level. The splinter of land that is Israel encompasses seventeen separate plant zones, and spans desert, swaths of plain, coastal slopes, and the serpentine webbing of valleys and terraced hills that witnessed and dictated past routes for armies, caravans, migrants, pilgrims and prophets.

“Take the state of California,” Allan tells his American tour groups. “Throw it into the washing machine and shrink it to the size of New Jersey, and you’ve got Israel.”

One trail in particular conveys this rich variety— the Israel Trail. Spanning over 1000 kilometer from the border of Lebanon in the north to Egypt in the south, it’s more commonly known, the “Shvil,” (the trail). Inspired by the Appalachian Trail in the eastern United States, Israeli writer and journalist, Avraham Tamir turned to Ori Devir, the director of the Israel Trails Committee.

Existing trails from Israel’s extensive, well-marked network were linked to new segments, creating a unique route that National Geographic later named as one of the world’s top twenty long-distance treks. It has attracted many hikers from abroad, but well before that accolade, it became a rite of passage for many young Israelis after their army service. Since it was inaugurated in 1995, it has been Allan’s dream to hike it.

Finally, in 2009, that vision became reality. “It has always seemed strange to me,” Allan said one day, “that here I am making my living by my legs, when most of my family could not even walk.” An automobile accident had impaired their father’s walking until his death some years earlier. Their older sister Sherrie, a stunning, dark-haired artist who once taught water aerobics as a hobby, had been wheelchair-bound for years with multiple sclerosis. Allan’s mother had died not long before from ALS, or Lou Gherig’s disease.

He decided that he wanted to raise funds for ALS research in Israel, while “walking the trail for those who can’t.” (This later became the slogan of our campaign.) While initially it had been his intention to hike it on his own, our 18-year-old son and I persuaded him to let us come along and help with the logistics.

On October 4th, — the first day of the festival of Sukkot — we stood at the trailhead. Black letters spelled out: “Welcome hikers to Kibbutz Dan and Shvil Yisrael (Israel Trail). This is the beginning of the Israel Trail.”

The guys swung their blue Deuter backpacks onto their backs. My tan and green Osprey was far lighter, but the moment I put it on it felt like lead. I wondered: how on earth was I going to manage this? Brushing those thoughts aside, we took turns taking pictures of ourselves posing by the sign, Allan and Ezra in their matching brown leather wide-brimmed hats, Allan and I holding our hiking poles, smiling. This was it. After months of planning, we set out from the gravel parking lot, hiking boots scrunching against the small stones.

There wasn’t much time to delay. At 9 a.m. we had to be at the Snir Stream, about three kilometers away, where Efrat, CEO of the ISRALS, the Israeli ALS organization, other members and families of those with ALS would launch the campaign by joining us for the first short leg of the trek. Hoping to upload short video clips of interesting points along the trail, we stopped briefly at a huge mud brick arch, the oldest intact one in the world, built by Canaanites around 1850 BC. Perhaps Abraham himself, who trekked huge distances in this region, walked right under this gate.

We placed our hands on the top of our poles and said the following: “God, thank You for keeping our steps steady and secure so that we may continue walking for all those who are not able to do so. Thank you for watching over us and keeping us healthy. Bless us to grow together as a family this day. Help us get to our destination.”

We passed rows of avocado trees laden with unripe fruit, and I suddenly craved something to eat. Snacking on dried fruit and nuts, we adjusted the straps on our packs, and felt our steps settle into a joint rhythm. Swallows swooped, trills and caws rose from the trees.

Shortly before nine, we reached the entrance of the Snir Nature Reserve, named for the 65-kilometer Snir Stream, the longest of the three main sources of the Jordan River. Efrat was already there. Dov Lautman, one of Israel’s premier businessmen and head of the ISRALS board, himself an ALS patient, arrived soon after. As his caregiver helped him out of the van into his wheelchair, Efrat introduced us. He had a pleasant smile and intelligent eyes. I was about to shake his hand when I realized he couldn’t move any of his limbs. That moment, while terribly awkward, also reconnected me to why I had committed to this campaign. I did my best to cover my faux pas by placing my arm on his shoulder and saying how honored we were to meet him. He wished us success.

More cars arrived. There were families with young children, a young woman whose father had recently died of ALS, and others with a relative or friend who had the disease. Thirty people set out along the first section of the path. It was the perfect place to inaugurate our hike, as this part was wheelchair accessible and beautiful, full of large shade trees that bordered the river.

We crossed a small wooden bridge, listening to the whooshing waters, feeling the sun on our faces, watching the rushes sway in the wind. The accessible section ended at a small shallow pool with a tiny waterfall. The kids waded in, splashing each other. We sat on the rocks watching beetles skate along the water’s surface.

From that point the meandering gentle stream gradually became a rushing brook and the footpath a weave of slippery mud, gnarly tree roots and moss-covered rocks. Using the poles to balance ourselves, a few times we lost our footing. At one point Allan slipped, stepping into water that reached above his ankles. Ice cold water rushed into his shoes. Walking right behind him, I heard each squishy step.

Our pace was chopped up with lots of small talk, stops and breaks. This first day included some of the most beautiful water sections of the trail, a rarity in this dry country. I was itching to break off from the group and jump into the small deep pools that lined the banks and feel that freezing cold water numb my feet and legs. Even though my pack felt awkward and my legs heavy, I felt like a bridled racehorse anxious to leave the gate.

A conversation with one of the families, a father and his son and daughter, roughly the same age as our own, shifted my perspective, making me realize how trivial these “inconveniences” were. “Our mom has ALS,” the daughter said. “She couldn’t come as she can’t walk.” The mother was fifty-two, just like me.

Excerpted and adapted from Angels & Tahina: 18 Lessons From Hiking the Israel Trail. Available from Amazon or directly from the other by writing inneralchemists@gmail.com

Recently listed as one of 11 books from Israel that can change your life it contains core life lessons for both the body and soul. From pine-covered hills to saw-toothed desert, Tzippi battled flooded rivers, scorching heat, and soul-sucking mud, unsure if the journey would make or break the family. Angels & Tahina is a testament to the power of family and impossible dreams, as well as a love letter to a country forged by faith and courage.

Tzippi Moss is a life coach and psychotherapist with over 35 years of experience. She has assisted hundreds of people to clarify their goals, overcome small and large challenges, and realize their dreams, creativity, and hidden strengths. A Jerusalemite since 1979, she has explored Israel both on and off the beaten track, together with her tour guide husband, Allan Rabinowitz.

Read the latest on the Angels and Tahina Facebook Page.